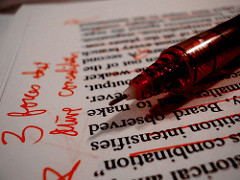 Really, how necessary is rewriting? In school we are trained to do draft after draft of our assignments. You complete your research, scribble out an argument and then spend hours (maybe even days) proofing and polishing the paper to perfection. You check that your paragraphs open with tidy succinct topic sentences and that your argument flows with plenty of supporting evidence. Then there’s grammar. Better make sure that you’re using commas, semicolons and dashes correctly!

The thing is assignments are not novels.

Academic essays, newspaper articles and yes, assignments, are not fiction. So does the ‘rewriting rule’ even apply? Dean Wesley Smith doesn’t think so. He believes rewriting is the knife that slits Originality’s throat. Constantly going through your draft polishing and tweaking every sentence may produce a technical competent manuscript, but it will be void of life. It will be stilted. Smith holds similar believes around grammar. Sure, pull out your copy of The Chicago Style Guide (or Australian Style Guide) while proofreading your memoir or the autobiography you ghost wrote, but this technical correctness has no place in fiction writing.

I’m not entirely on board with either of these beliefs, but my god they’re refreshing!

Now to clarify, Smith does not advocate publishing sloppy material. He believes that when you sit down to write, you should always try your very best. Smith also recommends that you draft in cycles. Say you produce twenty pages on Monday, when you set down to write again on Tuesday, go back and work through your last 4-5 pages from the day before (the pages you produced when you were your most tired). You’re tidying up your scrappiest work while getting into the zone before producing the next twenty pages.

Once a manuscript is completed; Smith gives his draft to his first read (or ideal reader for Stephen King fans). He takes what feedback he agrees with and spends half a day tweaking the draft. Then he forwards it onto a copy editor to check that all the commas and full stops are where they should be.

Then he publishes it.

Now, initially I thought ‘You’re just being lazy! Imagine how much better your work would be if you spent more time on rewriting.’ To be completely transparent, I was not all that familiar with Smith’s back catalogue; so I googled him and immediately went about dishing my heart up for lunch. Wow guys! Smith is the man behind Men in Black, Smallville, Roswell and Quantum Leap and holds licensed property to X-Men and Spiderman. Perhaps, this fella is worth listening to?

Despite Smith’s minimal redrafting technique, he has reached the much coveted status of ‘Full-time Fiction Writer.’ He accredits this success to writing at ‘white hot speed’ from the creative space at the back of his brain rather than the analytical place in his frontal lobe. Writing fast doesn’t equal writing badly. Smith had his first two short stories published in 1975 using this exact method. He thought, ‘Wow! I didn’t even edit those stories, imagine what could have happened if I did!’ Smith spent the next seven years working three day jobs and watching the slush pile of his rejected short stories grow. In 1982, he did away with the notion of proofreading and guess what? His work immediately started moving again and his bank account increased.

When you’re an unknown fumbling around this wasteland that is the publishing world, I think you’ll try just about anything. In honour of Smith’s advice I have chosen not to edit this post; written at white hot speed with my heart in my gut.