Editors are often described as invisible menders because they tend to be female, underpaid and their work goes unrecognised. 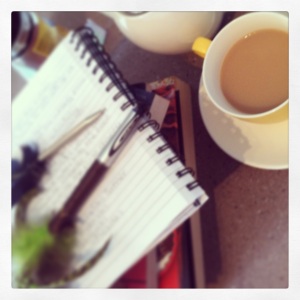 I believe there is a lot of truth to this statement, particularly the “invisible” part. The difference between an edited manuscript and an unedited manuscript can be huge. Of course, the reader doesn’t see this progression or multiple re-writes they only see the finished product. As a result, the author gets all the praise. I suppose that’s the point really, it’s ultimately what editors get paid to do. You don’t want your reader to come across a passage and say “Hey!? The tone/voice/style/register has changed completely! It’s like it has been written by someone else!”

It must be difficult for the editor though as all their hard work is credited to the author. You never see an editor’s name follow the author’s on a book cover. Admittedly though, most editors will get a mention either on an acknowledgements page or on the imprint page.

I have just finished reading Tara Moss’s first non-fiction book The Fictional Woman, so I decided to flick through the relevant pages to see if she mentions her editor. There is a chapter in the book titled The Invisible Woman, which is rather ironic as the editor is clearly not visibly mentioned anywhere! Granted, she thanks a lot of people in her acknowledgement page and one of those people could have been the editor but how are we to know? Moss doesn’t actually state “Thank you to my editor, Jane Smith…” etc.

I can’t imagine editors will ever step out from behind the curtain, I think being invisible really is simply part of the gig. However, a little “thank you” – in print – would certainly be welcomed.

4 thoughts on “Editor: The Invisible Mender”