There are many ways in which your writing could be thought of as bad, but in this week’s blog, I want to unpack just a few:

As with all writing rules, there is a place for sentimental writing. When used sparingly it can be emotionally evocative, when used in great swathes it becomes heavy handed.

One of the biggest problems that can occur with sentimental writing is when cruel, oppressive, pitiful, or difficult issues/situations are romanticised.

Think of the portrayal of black domestic workers in The Help, the violence these women would have suffered is swept aside in place of a pie joke.

There is nothing sentimental about inspiring compassion in our readers, and writing manipulates its audience one way or another, but when facts, history, or suffering are stuffed into the back of the closet or concealed by an ornate mask … that is a problem.

In terms of writing exercises, melodrama can be fun; however, no one wants to read a 600+ fantasy novel dripping with over the top emotions or purple prose.

Melodrama is exaggeration, extreme emotions, and unbelievable dialogue (“nobody talks like that!”).

Basically, it’s another form of telling instead of showing. Rather than establishing the mood through language, the writer is relying on the melodrama to communicate the seriousness of the situation.

Yes, life can be dramatic, but melodramatic writing can break believability and your reader may struggle to take the story seriously.

This bad habit can be avoided by focussing instead on a few craft basics such as, character development, obstacles, and feelings.

Readers need to care about the characters enough (or at least the MC) to be invested in what happens to them, they need to encounter obstacles, and the reader needs some access to their interior landscape.

Simple writing: The room was empty when he entered.

Lazy writing: He walked through the garden.

We’re all guilty of slipping into this lazy form of prose, hell, first drafts are usually full of these types of sentences as we’re trying to figure out the story!

Not every sentence will be a work of art, but a bad sentence can be fixed simply by exchanging the dull verbs for lively and surprising ones. (NB: you cannot solve this problem with adverbs!).

Take the above example, what would happen if we exchanged ‘walked’ for another verb?

Edited version: He skipped through the garden.

What if we added some adjective, nouns, or even proper nouns to spice it up further!

The sentence is still simple, but now it is clear and specific. We can see Larry, his actions, and the setting, whereas before we could not.

Lazy writing can also be an over reliance on cliché’ or your specific writing ticks – words or phrases that you unconsciously use … a lot!

Weeding these bad boys out and finding new ways to say the same thing will ensure that your sentences remain surprising and delightful.

I’ve previously blogged about how to reduce your word count, but there are several different ways in which we can overwrite.

First there is the inclusion of too many adjectives or adverbs.

For example: The chipped and worn door flew open with a bang to reveal a stately man with quite the pronounced belly and exceptionally large nose.

While this sentence is a bit fun in its’ over the top nature, reading an entire novel in this manner would be … unpleasant.

Edited version: The door opened with a bang to reveal a well-dressed man with a pronounced belly and large nose.

The edited version is tighter (18 words instead of 24) and more specific (well-dressed instead of stately).

The second way you can overwrite is by either saying the same thing two different ways (tautology) or by over explaining things.

The door, which is a large piece of wood that separates two rooms and is secured to a frame by hinges, flew open with a bang.

I don’t think I really need to unpack these …

Look, there are times when bad writing is okay.

Your first draft for instance will be bad, but when we becoming aware of what bad writing looks like, why it is bad, and most importantly how to fix it, we can effectively revise our prose and publish stories that we are truly proud of.

Now, over to you. What are some examples of bad writing that you can think of? What areas in your own writing do you need to work on? Leave a comment below, I’d love to know. 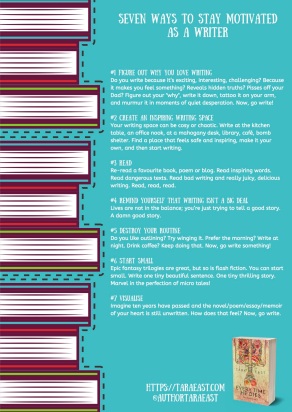 While you’re here, be sure to join my email newsletter and gain instant access to your FREE downloadable copy of the Seven Ways to Stay Motivated as a Writer. Plus, you’ll receive my weekly newsletter straight to your inbox every Thursday morning. This is where I share links to my latest blog/video, updates, and other exclusive content that I ONLY share via email.